GRAND RAPIDS, Mich., Nov. 19, 2020 /PRNewswire/ -- While the pandemic has challenged many to scale back their plans for celebrations this year, a recent Meijer customer survey found that some families plan to treat their holiday as an opportunity to reinforce the spirit of Christmas. And that kids may be in for the biggest surprises of all. 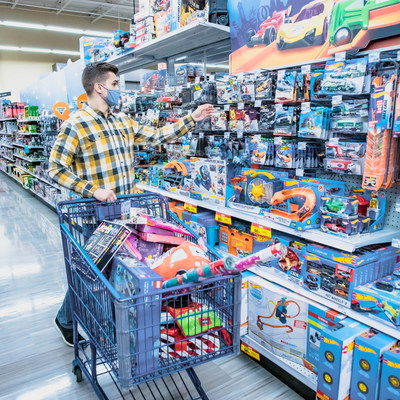 "An advantage of our self-quarantine is that we've set aside more money for the holidays," said Jenny Moll in her customer survey response. "We've avoided restaurants and large gatherings hosted by family and friends most of this year to protect our parents, so we want to use that money to spend more on gifts for the kids."

Moll is one of 1,200 shoppers recently surveyed on how the coronavirus pandemic has changed shopping habits, and her plan of repurposing dollars to brighten eyes and smiles is echoed by other participants. This year has caused numerous challenges – virtual learning, missed activities and cancelled events – that significantly impacted children, and have inspired many parents and caregivers to suggest 'they deserve something to look forward to."

"We are beginning to see holiday excitement as customers prepare for their Thanksgiving dinners and continue seeking deals to complete their shopping lists," said Peter Whitsett, Executive Vice President of Merchandising and Marketing. "Our focus is to continue to maintain clean, socially-distanced stores and make sure customers have multiple ways to take advantage of our sales."

The survey confirms that overall customers plan to spend less on gifts this year because with holiday gatherings reduced, they have fewer gifts to purchase. Instead, they plan to prioritize spending on entertaining and gift-giving to those closest to them. Nearly 60 percent of customers indicated they will spend the same on food and gifts this holiday season but will splurge on those closest to them.

Other insights provided by the Meijer holiday shopping survey include:

Finally, some of the extra holiday budget is expected to be spent on adapting living spaces – both inside and out – to maintain safe distance. The survey finds that about eight out of 10 customers expect to decorate as much or more than last year.

In March, one family in Menomonee, Wis. began stringing up lights and unboxing decorations around their home to signal normalcy and togetherness in response to the pandemic. Social posts of their home quickly went viral, neighbors were inspired to unpack their decorations and, before long, the movement gained international attention. The inspiration spread, and now the idea of decorating more seems to be catching on once again.

"We decided we are going to start decorating for Christmas early, so I plan to buy extra to make both inside and out beautiful this year," said Trisha Shapiro in her survey response. "The kids are really looking forward to it and I think it could be the family activity that just might make a difference this year."

About Meijer: Meijer is a Grand Rapids, Mich.-based retailer that operates 256 supercenters and grocery stores throughout Michigan, Ohio, Indiana, Illinois, Kentucky and Wisconsin. A privately-owned and family-operated company since 1934, Meijer pioneered the "one-stop shopping" concept and has evolved through the years to include expanded fresh produce and meat departments, as well as pharmacies, comprehensive apparel departments, pet departments, garden centers, toys and electronics. For additional information on Meijer, please visit www.meijer.com. Follow Meijer on Twitter @twitter.com/Meijer and @twitter.com/MeijerPR or become a fan at www.facebook.com/meijer.