BELMONT, Mich., June 19, 2022 /PRNewswire/ -- In one of the most exciting Meijer LPGA Classics yet, Jennifer Kupcho claimed the title of Champion and the event surpassed its increased fundraising goal to garner $1.25 million to feed families in need. Kupcho joins an illustrious list of past Champions to hoist the crystal on the 18th green of Blythefield Country Club as the winner of the 2022 Meijer LPGA Classic for Simply Give. 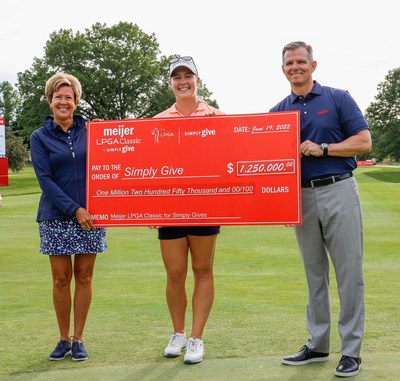 Tournament officials proudly announced the event generated $1.25 million for the Meijer Simply Give program, surpassing its already increased goal. This donation will help stock the shelves of 262 food pantries the retailer partners with across the Midwest as they experience greater need amidst ongoing economic challenges. Including this year's event, the Meijer LPGA Classic has generated $8.65 million for Simply Give.

"In so many ways, this was our best tournament yet," Meijer President & CEO Rick Keyes said. "Our community has always played a major role in the success of this event, but for them to rally around this cause and help us not just meet, but surpass an ambitious goal, is incredibly humbling. We're grateful for the ongoing support of the players, community and volunteers who made this week possible."

In the second victory of her LPGA career, the 25-year-old Wake Forest University alum shot 71 Sunday to finish at 18-under 270 and prevailed in a two-hole play-off against Leona Maguire (65) and defending Champion Nelly Korda (72). Kupcho said the local community played a major role in her tournament experience, specifically thanking her Grand Rapids host family for their support.

"The crowds were huge… They always are at [the Meijer LPGA Classic]," she said. "I think Grand Rapids does a great job bringing awareness to the LPGA."

The tournament brought record-setting attendance this year to watch an elite international field of 144 players headlined by nine of the world's 10 best golfers compete.

"On behalf of Meijer and everyone at the tournament, we congratulate our newest Champion Jennifer Kupcho," said Cathy Cooper, Executive Director of the Meijer LPGA Classic. "We're honored to once again name such a high caliber professional as our Champion and commend her for an exciting and strong performance through the very end."

In addition to the $1.25 million raised by this year's event, Meijer will donate $25,000 to a hunger relief organization of Kupcho's choice as part of a tradition the retailer started in 2021. Last year's winner, Nelly Korda, chose to keep her inaugural donation local to the tournament by supporting Kids' Food Basket in Grand Rapids, Mich. Details on Kupcho's donation will be shared in the coming weeks.

For more information on the Meijer LPGA Classic for Simply Give, please visit meijerLPGAclassic.com. Stay up-to-date on the latest tournament news using #ForeHunger and #MeijerCommunity.

ABOUT MEIJER:
Meijer is a Grand Rapids, Mich.-based retailer that operates 262 supercenters and grocery stores throughout Michigan, Ohio, Indiana, Illinois, Kentucky and Wisconsin. A privately-owned and family-operated company since 1934, Meijer has a fundamental philosophy aimed at strengthening the communities it serves and proudly donates more than 6 percent of its net profit each year to charities throughout the Midwest. With hunger as a corporate philanthropic focus, Meijer partners with hundreds of food banks and pantries through its Simply Give and food rescue programs. Meijer also supports education, disaster relief, and health and wellness initiatives. For additional information on Meijer philanthropy, please visit www.meijercommunity.com. Follow Meijer on Twitter @twitter.com/Meijer and @twitter.com/MeijerPR or become a fan at www.facebook.com/meijer.

ABOUT BLYTHEFIELD COUNTRY CLUB:
Located just north of Grand Rapids, Blythefield has been providing families the best golf and social experience in West Michigan since 1928. With the Rogue River flowing through, Blythefield boasts one of the most beautiful championship layouts in Michigan. Previously, Blythefield has hosted the 1953 Western Amateur, the 1961 Western Open, won by Arnold Palmer, and the 2005 Western Junior won by Rickie Fowler. Beginning in 2014, Blythefield is honored to host the Meijer LPGA Classic. Learn more about Blythefield Country Club at www.blythefieldcc.org.