Expanded program empowers Meijer team members to select, donate to 500+ nonprofits in their communities for the second year

GRAND RAPIDS, Mich., Nov. 29, 2022 /PRNewswire/ -- Following the success of its inaugural Meijer Team Gives program in 2021 that empowered store and distribution facility team members to select nonprofits meaningful to them for a $2.8 million donation, the Midwest retailer expanded it this year to engage even more team members and make an even bigger impact in the communities it serves. In 2022, the Meijer Team Gives program will donate $3 million to more than 500 nonprofits chosen by Meijer team members, bringing the combined 2-year total to nearly $6 million. 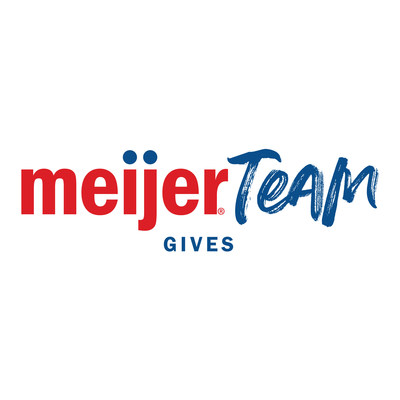 "Meijer cares about the communities we serve, and our team members are the face of that commitment in our stores every day," Meijer President & CEO Rick Keyes said. "We're humbled to see our team members' passion and support for these amazing nonprofits through Meijer Team Gives, because they are the core of who we are as a company."

During Meijer Team Gives, each store and distribution facility is given $10,000 to donate to one nonprofit or split between two in the community. Team members at each location work together to identify the local nonprofits meaningful to them and the communities they serve. This year, the retailer extended the program to include six new stores that opened in 2022, as well as its Team Member Resource Groups to make an even bigger impact.

Additionally, seven Meijer stores – Howard, Wis., Lansing, Mich., Rivertown Market in Detroit, Warsaw, Ind., Manistee, Mich., Royal Oak, Mich. and Cold Springs, Ky. – that exemplified the retailer's commitment to community last year were given an extra $5,000 each this year to donate to another nonprofit of their choice.

In Muskegon, Mich., the entire store team voted by secret ballot, and ultimately chose to donate to The Child Abuse Council of Muskegon County, as well as Heaven Can Wait, a pet rescue dedicated to rescuing, re-homing and providing spay and neuter options.

"We saw so much interest in volunteerism last year after the inaugural Meijer Team Gives, and it was amazing to see the way that our team members became involved with the organizations we chose, so we hope to spur similar interest this year," Fruitport Meijer Store Director Tom Agrillo said. "The best part of bringing Meijer Team Gives back for a second year was seeing the program's growth, alongside the anticipation of our team members who were not only looking forward to it but even researching local organizations in their free time."

The Westfield, Ind. Meijer, north of Indianapolis, chose a nonprofit called Student Impact for their donation.

"We've donated to them several times now because they make such a big impact on students here in Westfield," Store Director Chad Clark said. "The organization is mostly run by volunteers, and they give safety and stability for kids with nowhere else to go. It's such a great example of how our community rallies together to take care of each other, and our team members are so honored to be able to continue supporting their mission."

The organization will use the funds to help with their mission of providing a safe and consistent environment, as well as meals and activities for students in the community.

"Our afterschool programming and special events would not be possible without the help and support from Chad Clark and his team at Meijer," said Danyele Easterhaus, Executive Director of Student Impact of Westfield. "The team at Meijer really believes in our mission, and their financial support through Meijer Team Gives, as well as gift cards throughout the year enables us to provide more mentorship for the kids in our community, which builds trust and relationships and makes our community a better place."

About Meijer: Meijer is a Grand Rapids, Mich.-based retailer that operates 499 supercenters, neighborhood markets and Express locations throughout Michigan, Ohio, Indiana, Illinois, Kentucky and Wisconsin. A privately-owned and family-operated company since 1934, Meijer pioneered the "one-stop shopping" concept and has evolved through the years to include expanded fresh produce and meat departments, as well as pharmacies, comprehensive apparel departments, pet departments, garden centers, toys and electronics. For additional information on Meijer, please visit www.meijer.com. Follow Meijer on Twitter @twitter.com/Meijer and @twitter.com/MeijerPR or become a fan at www.facebook.com/meijer.